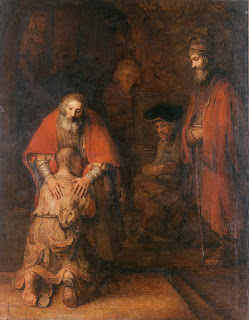 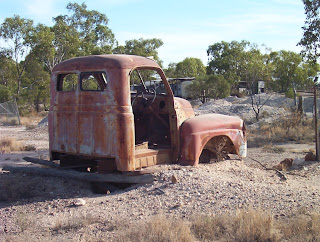 About the images:
Left: This image comes from http://commons.wikimedia.org/wiki/File:Rembrandt_Harmensz._van_Rijn_-_The_Return_of_the_Prodigal_Son.jpg
Right: Abandoned cars in the Australian Outback are a bit like the Prodigal son. They sit there for years and then some car enthusiast comes along, takes them away and lovingly restores them to their former glory. The odd thing is that sometimes out in the outback you see the other son too. It is the car that looks all shiny and new on the outside but is pretty much wrecked on the inside. Even worse - sometimes there is nothing at all under the bonnet.

Listening Song: Always Have, Always Will 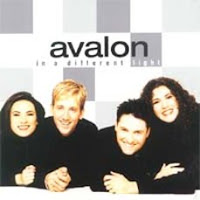 By Avalon on their album, In a Different Light or on WOW 2001 (pictured at right) This goes well with the gospel reading. 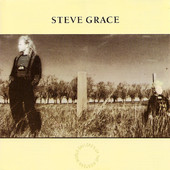 Listening Song: Prodigal Son
By Steve Grace on his album, Children of the Western World (pictured at left). Obviously this fits well with the gospel reading :)

Kids' Story: Candelo
One hundred years ago, Candelo, New South Wales, was a major wagon stop between the Monaro high country and the coastal shipping ports. The town's river crossing could be disastrous for heavily loaded wagons because river levels and the sandy river bottom were forever changing and there were often patches of quick sand. Crossing the river was particularly dangerous towards evening and in the dark. The town and bullockies together devised a system whereby when the bullockies arrived at the last rise before the town they would shout out candle-o. In response, the whole town would run down to the river with lights and line the sides of the safest place to cross and thus guide the bullock wagons safely into town for the night.
Link this story with the way we leave a veranda light on when we are expecting visitors and the way God is always waiting with anticipation to welcome us.

(pictured at right) I used the trailer for this film (2007) which is readily available on the web and which has a great line linked with the gospel reading for this week (see discussion questions below).

Discussion: Martian Child
"There's nothing you can do that will make me change the way I feel about you"
1. How would you feel if someone said that to you?
2. Do you think God says that to us? Why?

Drama: The Prodigal's Mum
Ask a mum of adult children to read the parable through a few times before the service and ask her to put herself into the role of the prodigal son's mother. This works better than having a script.
During the service an interviewer asks her the following questions:
1. Who are you?
2. Your family has been in the news lately. What's the real story here?
3. What a drop kick of a son!! I bet you and your husband gave him the rounds of the kitchen when he came skulking back home?
4. So you followed your husband out to greet him!!!??? But at a more decorous pace as befitted a woman of your standing.
5. So what was with the party? Who threw that for him?
6. What a wonderful family! I suppose his older brother was just as pleased as you both were?
7. Well, did you finally convince him?
c. Ann Scull - permission given for use in worship.

Sermon: The Welcoming Church
Found at http://petercorney.com/2009/09/01/being-a-welcoming-church/. A call to church communities to be like the welcoming father in the parable.

Illustration: The Flushpools.
Read about the Flushpools in Adrian Plass's Sacred Diary quadrilogy (Volume 1 pictured at left) and you will find a modern example of the older brother from the Prodigal son story (and wet yourself laughing! - these are very, very funny books which help us to truthfully reflect on what it is to be a follower of Jesus today).

Story: Sheep
Found at http://www.sermonillustrations.com/a-z/s/sheep.htm
This story goes with the gospel reading.

Story: The Return of the Prodigal Son: A Story of

Homecoming
By Henri J.M. Nouwen, Darton, Longman and Todd, 1994, ISBN 023252078X. There is lots of useful stuff in this book but I found the Prologue very helpful for this weeks preaching (pictured at right). 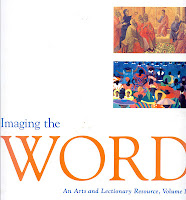 Poem/Meditation: Listen To What God Is Saying To Us.
By Henri J. M. Nouwen and found in Imaging the Word Volume 1 (pictured at left) by Kenneth T. Lawrence (ed.), United Church Press, 1994, ISBN 0829809716, page 165. I projected these words with multiple images of art works of the prodigal son story. There are plenty of free images of this story on the web. While the slides played through I backed them with the following piece of music: Monastery of Rabida by Vangelis on his album, Reprise.

Quote: Meister Eckhardt
We search for God in a far country while God waits for us at home.

Response Activity
Time of silence.
Ask in the silence with spaces between each question or statement:
Are you like the older or the younger son?
What is the message and the challenge of the parable for you?
Allow the Holy Spirit to read your heart and speak to you.
Time of silence.
NB: I have used these questions more than once over the years. Sometimes it does not hurt to use something more than once; because, at various times in our lives we will be like the younger son and at other times we will be more like the older son.

Response Activity:
Put out as many postcard size pictures, advertising cards, whatever as you can find - I put mine around the communion table and I tried to put out about ten for every person present so that there were heaps to chose from (I am an avid collector of cards etc). I projected the following questions and left people to it for about five minutes.
At the end, encourage people to share their cards in groups of three and to share the reason why they chose the cards they did. I concluded this activity with the Nouwen poem/meditation above.

Also:
Listening Song: Forgiven
By Sons of Korah on their album, Redemption Songs.  This song uses the words of Psalm 32.

Prayers and Poems: Prodigal
Found in Dad and Daughter by Ron Gordon and Jennie Gordon, 2012, ISBN 9780646586601, page 146. To order a copy of this excellent book email jennie.gordon@billanook.vic.edu.au

Response Activity: Love is a Relationship

Found in Bringing the Word To Life Together: Year C by Andrew Collis and Dorothy McRae-McMahon, Mediacom, Adelaide, 2012, ISBN 9781921945083, page 54ff. This works well with all the gospel reading.