Easter 3 C (April 14): The Impact of the Resurrection 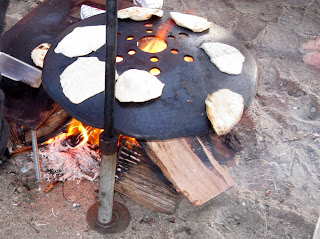 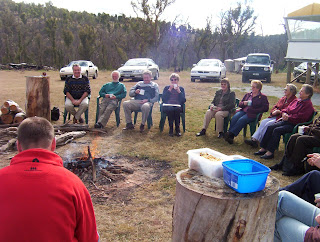 About the Images:
Left: This is my photo of our middle eastern bread cooking at our Easter dawn service when we re-enacted the brekky Jesus cooked for his disciples on the beach.
Right: The Australian church still likes to meet around an open fire from time to time. This is a Uniting Church Presbytery area meeting at Wulgulmerang in Far East Gippsland.
Both photos are mine and can be used for worship and related activities. 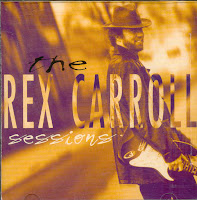 Listening Song:Hands of God
By Rex Carroll on his album, The Rex Carroll Sessions (pictured at left).

Monologue: Peter
I've made some big mistakes in my time! ........ but nothing like the ones I made on the night when Jesus was arrested. It all started to go wrong when the soldiers came to arrest him. I couldn't believe it was happening! I jumped in like a real life rambo and took a swipe at one of the arresting soldiers - but I only managed to remove his ear and before I could have another go, Jesus reached out and healed him. I was astounded. And as the crowd started to snigger, I felt big and stupid and clumsy. So I stood and watched them lead him away as it hit me that after three years I still didn't really understand what he was on about. But I couldn't abandon him. I followed the soldiers at a distance till they reached a courtyard. I tried my best to blend in but it was difficult. They all recognised me. The servant girl. The gatekeeper. And a big bloke who was a relative of the soldier whose ear I had removed! He recognised me in a flash!! And if they didn't recognise my face then my Galilean accent gave me away. They were all having a go at me - trying to make me admit I was one of his friends. But I couldn't do it. Three times I denied that I even knew him! I was so scared of what they would do to me. I caved in like a house of cards.

But that's not the worst of it. Jesus knew what I was doing! As the soldiers led him away he looked straight at me, our eyes locked through an open doorway.... and I could tell. He knew all right. And ....and there was nothing I could do! And I remember his words telling me I would do this awful thing. I felt ill just thinking about it. I ran outside and cried like a baby. It was as if my heart was breaking. In a matter of minutes, my whole world was in shatters.

After he was crucified, strange things happened. I was one of the first to see his empty tomb. He appeared to us all one Sunday when we met together in secret. But for me, life became even more difficult as the dark cloud of my denial of him spoilt any of the joy. It was as if there was a wall between us - a wall which I had built - which I didn't know how to remove. I was dying to speak to him but it was also the thing I dreaded most.

So I went back to my boats and the fishing. What else could I do? I didn't have the heart for it any more but it kept my hands busy. I conned a few of the others into fishing with me. And one morning as we returned home, there was Jesus - on the beach. I was so intent on speaking to him that I couldn't wait for the boat - instead I dived straight in and swam to shore. But I was tongue- tied. I couldn't say all the things that were on my heart. Instead I ran around doing everything he asked with all the enthusiasm I possessed. And my business and eagerness hid the wall between us - but could not break it down.

After brekky, he took me for a bit of a walk along the beach. I didn't know what he was going to say. The weight of my guilt blotted out any other thought. I couldn't think how to even start to say all the things I wanted to say. If I had tried to say that I loved him it would have sounded trite and hypercritical after all that had happened. But I didn't have to. Instead he asked me if I loved him! Three times I had said he was not my friend on that terrible night. Three times on the beach he asked me if I loved him. Three times I said yes with my whole heart. And I knew he believed me because he gave me a job to do - to look after his followers for him - a job that proved to me that he trusted me and that the past was forgotten and that the wall between us was gone.
© Ann Scull

Discussion Questions:
1. Can you relate to the way the disciples felt after Jesus' death and resurrection?
2.What do you do when life is tough?
3. Have you ever given up on God or thought about giving up on God?
4. How does God call us back? 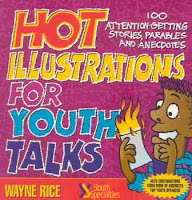 Story: The Cliff
Found in Hot Illustrations for Youth Talks by Wayne Rice, Youth Specialities, 1994, ISBN 0310402611, page 60 (pictured at left). This story is about trusting God. 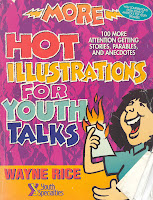 Found in More Hot Illustrations for Youth Talks by Wayne Rice, Zondervan, 1995, ISBN 0310207681, page 98 (pictured at right). This story is about trusting God and fits well with the Acts reading. 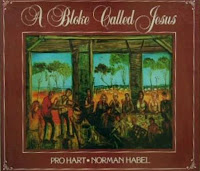 Response Activity:Choose two (or one or three or four depending on the time you have - each station takes about five minutes) of the following stations. Ask:
What do you need?
Who are you like?
Are you like .......:

Station 2. Ananias and his need for courage:
Read together the CS Lewis quote from Mere Christianity found in Imaging the Word Volume 1 by Kenneth T Lawrence (ed.), United Church Press, 1994, ISBN 0829809716, page 195 (pictured in an earlier blog).
Discuss:
Who has ever played the role of Ananias for you?
What do you do when it looks like God is going to ask you to do something really hard?
Has it ever seemed so hard that you walked away from Jesus or thought about doing so?
How does Jesus call us back?

Station 4. Peter and his need for forgiveness:
Find a quiet place and become aware of the gentle rhythm of your breathing. Read Not...Do You Promise to be Good prayer slowly – as many times as will fit in the time you have. Leave a space between each reading to sit and listen to what God is saying to you. This prayer can be found in Found in Present on Earth by The Wild Goose Worship Group, Wild Goose Publications, 20028, ISBN 0901557642, page 199 (pictured in an earlier blog)

Also:
Listening Song:Garments of Joy
By Songs of Korah on their Shelter album, Wordsong Artists, Belmont, Victoria, 2002.  This song uses the words of Psalm 30.


Poem: Breakfast
Also a great prayer and collect based on the gospel reading included on the same page.  Found in Dad and Daughter by Ron Gordon and Jennie Gordon, 2012, ISBN 9780646586601, page 152. To order a copy of this excellent book email jennie.gordon@billanook.vic.edu.au

ann
I am married to Joe and have two great kids - Jared, 39 and Kate 36 who have two lovely partners - Deb and Leigh. I am an ordained Minister of the Word in parish ministry in the Uniting Church in Australia. I have a passion for Contemporary Worship (whatever that means) and have set up this blog in order to share resources which I have found interesting and exciting. You can find my email address in my complete profile.